Before my husband and I got married, we had long conversations, discussion and debates about how we were going to raise our children. We agreed on basic parenting ideas, that we wanted our kids to take piano lessons, that they should be athletic but not at the cost of our Saturdays, and that treats are fun in small doses. We both were raised similarly in many ways, except religion. For a time, we wondered if we could make this difference work. We sought out the advice of friends, family members, and even religious experts. Just like when I had to see seven doctors in my twenties before I found the one that said I didn't need surgery to remove an extra rib I have. We had to do a lot of searching to find the answers we needed.

Many religious groups believe an individual has to choose one religion to be. That learning and practicing more the one will confuse a child. We found a very liberal rabbi who explained to us that he felt religion was for adults, traditions are for children. That resonated with us, and we began to celebrate all holidays together. We share the meaning behind all holidays, but we don't push beliefs, and instead focus on the common moral values that both our religions share. Together my husband and I believe that you don't have to only be one religion and that one person can feel included in all religions if they chose to be. Sadly, I am not sure every religion would agree that all are welcome.

The way we see religion is similar to the way I think about language or music: we don't have to teach our children one language and say that is all they are capable of understanding. Even if they don't become fluent in more than one language they can certainly learn another. We don't only get enjoyment from one type of music. I can equally be moved by Tchaikovsky and Nirvana. I don't have to choose one, so why do I have to choose one religion? All have so many common threads and yet so many elements that are unique and should be available to all — not only a few.

Recently my daughter was invited to be part of a Jewish youth group. She was excited to be a part of it and we encouraged her, because it had a social justice component and was part of an organization that as far as we knew was pretty liberal and welcoming to interfaith families such as ourselves. However, when she finished her first meeting which was planning a laser tag event, we noticed that she wrote down "invite only Jewish friends." I got a bad feeling immediately. It just didn't feel, look or sound right.  I was sure (or maybe I was just hoping) that she must have written it down incorrectly. Or that what the woman leading the program meant to say was invite whoever you want but remind your friends it's a Jewish-themed event. Or anyone who has an interest in playing laser tag, making backpacks for kids in need, and being with kid who share a Jewish connection or interest in some way are all welcome. That wasn't what was said though. So we all had a big talk about it.

This is a delicate topic. One that has many layers to it. Historically, Judaism unlike some of the major religions is not missionary based. It is not looking to recruit new members, and feels very exclusive. As a result there are many issues with it getting smaller in numbers. Temples charge money for families to be members and if they don't join and just want to come to holiday services it can be extremely expensive. Personally, I don't want to have to join a club to feel spiritual or welcome. Every year I seem to try a new temple, looking for a place that won't break the bank, that is liberal enough for an interfaith family and that is welcoming. I'm still searching.

It seems dated to me to have to chose only one religion. Years ago I remember reading an article about a mixed race child who struggled with his identity because he felt pressure to pick one race. Fortunately mixed race children are more common now and so it is less of a struggle to have to connect with only one part of who they are. If there was a youth group and the leader said, “Only invite your white friends" that would be called racism, and white supremacy. Not sure how saying "only" could ever feel right in any invitation. If only those of Indian decent could practice yoga, the rest of the world would be missing out. I think we are all missing out on so many wonderful teachings that all religions can offer because only a few are welcome.


My daughter didn't go to the event. She was disappointed but understood that until all were welcome it wasn't right. This situation was a learning experience for all of us. My husband felt that if our daughter wanted to invite him as her friend he wouldn't be welcome. I explained that for so many years what he was feeling was what most Jews and minorities feel often in their lives. It doesn't feel good. The world isn't going to change overnight, and sadly it feels worse than ever right now, but I cannot condone any exclusive un-welcoming "initiations." If I have to start my own social justice/religious, culturally rich groups I will — and loud and clear, it will be known that all are welcome. 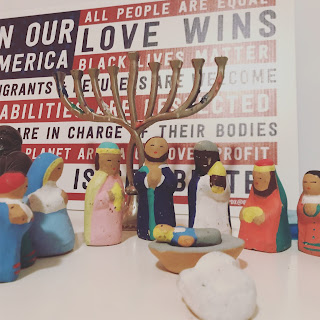