Don't Tell Me What To Do

Saturday morning I got my kids up and dressed and asked, then told them that we needed to walk across the complex we live in to go look at a table that was for sale. I have wanted to make an art table for them for quite some time, and I finally put my mind to it to get it done. Craigslist came through for me this week and one of the listings was a short walk away. This could have been the easiest Craigslist exchange to date, except my daughter decided she didn't want to come. At nine we are not leaving her home alone yet, even if we are only walking nearby. Also, I wanted her to have a say in the table since it was for her too. She dug in her heels though and decided to go down the path of most resistance.

She is mostly pretty easy going, except for when she is not. Being stubborn and headstrong comes with any kid from time to time, but there is something about her stamina that continues to baffle me.  She doesn't throw down a fight often but when she does, there is a fire in her. I am sure at some point this will come in handy, but I myself don't find it particularly helpful at the moment. After much crying, whining, begging and asking "why do I have to go?" she did make it out of the house with us. She cried all the way there, and even tried a few times to slow us down. I defined the word manipulative to her, then the word irrational, and eventually took to ignoring which feels horrible all around and the most challenging for me.

This age is most interesting to me. Pretty amazing mostly, since she is like a little grown up with how well she can articulate herself. She is passionate about so many wonderful things that she discovers. She is more independent an capable than ever, and yet still loves a good cuddle. She goes off to sleep away camp, sleep overs, and to play at friend's houses with out looking back, but randomly she will protest a walk to look at a table, and I am reminded that she still has some of that little kid in there. I dislike the term Tween, but I get it at the same time. She is learning that her body might change in the next few years, that she will become a "woman", but yet she is still a kid. Its confusing, and a lot to take in.

She stopped crying and we looked at the table. With her help we decided it was a fit for us and we bought it. On the way home, when she was calm I asked her what happened. She said "mommy, you told me I shouldn't do anything I don't want to do." I stopped, took a moment, and explained what I meant when I said that. I explained that no one likes to be told what to do, but sometimes we have to do things anyway. I explained though the difference between things we are not comfortable doing or don't feel right and the things that are maybe just not fun. I am still not entirely sure she was ever really confused in the first place, but I thought I should make the distinction to be clear.

If her quick change of moods, and assertion of will are any indication of what is coming in her teens, then I best up my game. It's a fine line for her right now between Independence and needy. Topped with not wanting to be told instead of asked. My husband and I can both relate to that. I believe he to said to me yesterday "Don't tell me what to do" and I could have avoided that if I had phrased things a bit more respectively. This is delicate territory for us all.  Fortunately, I don't need go table shopping with kids again anytime soon. 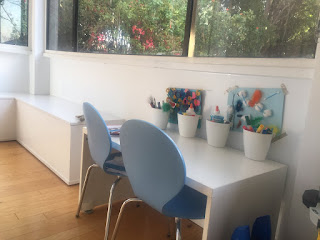