We just got back from a trip to New York for Thanksgiving. On the flight there, a passenger complemented the kids on how well they traveled. I explained that they have been taking this flight since they were newborns. She asked if New York was home or LA, and for a second I hesitated. Los Angeles is home now, but New York will always be home too. I stumbled and said, “Well, we live in LA, but NY is where I grew up, so I guess that is home too." I'm not sure she wanted that much information but she got the truth.

It took me less than twenty four hours, six layers of clothing, three crowded subway trains, and two freezing children to remember why I prefer to raise children in Los Angeles, but NY always pulls out all the stops in the end and does something to impress me. I took the kids to see the Thanksgiving day parade balloons being inflated. What was once an activity that involved showing up the night before Thanksgiving to a street corner, has now become a much bigger event. The secret is out and it is almost as crazy to see the blowing up of the balloons as trying to go the parade itself. Regardless, I wanted to take the kids. We got off at the right subway stop but then was instructed to walk down four more blocks to enter the line. So even though I tried my best to avoid the extra walk in the cold, it was a necessity to get to the entrance of the line. As the three of us followed the crowd, my five year old said he was cold and wanted to go home. I didn't know if he meant the NY home or the LA home, but either way I wasn't going to ask. We came that far, we weren't turning around.

When we finally got to the start, I realized this was only the security check part, and that we would then have to enter a four block winding line. It was then that I patted myself on the back for living in LA. I resented all the accessories we had to wear to stay warm, I resented the huge crowd of people around us, and I wondered if my son was old enough to handle this outing. We finally got passed the check and into the line. There was no going back now. We would see the balloons no matter how long it took. It was that point of no return moment that my son said, "Mommy, I have to go pee pee." Perhaps he wasn't quite old enough yet after all.

I looked around and there really was no way out of the line. I asked him to hold it a little bit, and then I wondered what I should do. If he wet his pants he would freeze and we were a good hour away from our house. I suggested he go to the side of the crowd and I could shield him, but he held on to his dignity, and pleaded that we find a bathroom. All of the apartment buildings along the street were barricaded off so we couldn't even get there if we tried. I kept in the line hoping he would get distracted, but then he just tugged my arm and began to cry. "Mommy, I need to go pee pee." I had to figure this out. Police were everywhere blocking all of the barricades making it impossible to exit the line and also impossible to have a little boy do a wee without being seen. I decided to ask one for help. I walked to the closest cop and explained my situation. He paused and said " I don't really know what to tell you" then I think he took pity on my panicked little boy and said to follow him. He would see if he could find us a port a potty. He said the best he could do afterward was bring us back to the spot in line where we got out. We followed him to a toilet, and when we got there it was locked. He went off to find a key and when he opened it, he said it was pretty clean. We all decided to use it because who knew when we would find a bathroom again. When we got out I asked the kids if they still wanted to see the balloons. The start of them all was right across the street from where we were standing so we got a quick look, but I didn't know if they wanted to go all the way back in line.

The police man didn't wait for the kids to answer, he said "follow me" and brought us right to the front of the kine. He wished us a Merry Christmas, and I was so thrown by his kindness and willingness to help us. I was also thrown with him wishing us a Merry Christmas before Thanksgiving so I responded by saying thank you and wished him a Happy New Year.  We were all so giddy as we said goodbye. Giggling my daughter asked why I said "Happy New Year," and I explained to her that I just felt like he had done us such a big favor I had to make my well wishing last a long time. We all laughed. We had a great time looking at the balloons up close, and by the end of the night I was falling back in love with New York.

We had a nice stay in the city. We played in the park, saw the leaves changing, and enjoyed seeing loved ones. Families are never without little complications here and there, but overall it was a very satisfying visit. Home is where the heart is and wherever I am, I try to bring my heart. It was good to go home and it is good to be back in my California home now too. 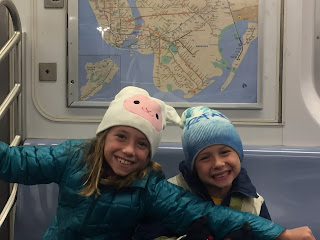