The last thing I wrote was about being impressionable. Nothing challenges my confidence level more than when my children have a meltdown and I can't seem to help them out of it. I start looking at them and wonder if there might be something wrong with them. After trying so gently to talk to them, and they still continue on hysterically, I begin to lose my patience. I quickly try to reference all the tools I have read about in parenting books. I've read not to raise your voice since losing control only makes them feel more panicked, and your yelling will only add to their meltdown. I have also read to stop what ever you are doing and get eye level with your kid, and acknowledge what they are feeling. I have also read that ignoring your child completely during their freak out can be effective. So after so many conflicting reports, I can understand why I am paralyzed sometimes and can't figure out which tactic to try. Oh also, everything I read says to stay consistent -- so there's that.

Every night when I make dinner, I begin my dance. I am reminding one to please focus and do homework, while I attempt to keep the other one from snacking right before dinner. Its the same routine, and I work really hard to get a balanced, healthy and somewhat appealing meal on the table. The end result is usually the same and my husband and I eat while they ask if they could be done after two bites. They say they tried it but don't really like it. After researching so many kid friendly meals, testing recipes, and spending time and money on cooking I am shot down by these little humans. If they scarf down some bland rice dish I have carefully unseasoned for them and say they like it, I am thrilled. I have won them over again. This is the most emotionally abusive relationship I have ever been in. It works both ways though. I make them eat fruits and vegetables and threaten to take away dessert. I tell them they will not grow strong without muscle foods. I tell them they will not have smart brains without superfoods. I tell them the dentist said no gum, and the Dr. said only dessert. Then I read another article about making sure kids have some sugar so that it isn't taboo, then I read another one saying that sugar will kill us all.

In moderation is the advice these days in screen time. No one is really there for you though when that thirty minute show is over and your kid is so angry at you for turning it off. Or when you are the only parent who doesn't let your kid have an iPod touch, no one prepares you with the law degree needed to handle that argument. I wasn't aware of the post-tv show watching zombie that would be replacing my child, or that they would be glued to the couch unsure of how to use their legs again. It's healthy to watch a little television though. After all, that is how we wind down at the end of the day. The taboo thing applies here too though, so best not to take it away completely. I personally don't have my kids watch it during the week. Studies show kids are much more active and creative when you take it off the table.

"They" say it is best not to tackle more than one issue with your child at a time, so if my son is pulling his sisters hair, screaming, and kicking — which one do I tackle first? I have tried to train him to wake up and say "good morning" instead of asking me for Batman or a chocolate chip cookie. Today it didn't work though. I sat on his floor and quietly responded to every “Mommy, I want to watch batman." I didn't raise my voice, I didn't give in, I didn't ignore him. I simply explained (like many books have instructed) that we don't watch Batman in the morning, and my answer is final. I also told him that when he ready to talk about something else, I will be right here. I did as "they" say and he didn't. So then I ignored him, not because I was trying a different approach, but because after 20 minutes of hearing, "Mama" yelled, I was paralyzed by all of the options and opinions swimming through my head. As of right now, parenting books are no longer welcome on my nightstand. I'm choosing sleep, and self-preservation. Studies say some alone time will do me good. 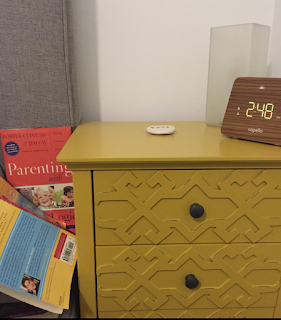