When I had my first baby, a dear friend who doesn't have children gave me some advice. She asked me to please remember my friends who don't have children. I quickly responded that I would of course never forget any of my friends, but she went further into explaining how easily women can forget their past identity once they become a mother. I took her advice to heart, and I have never forgotten it. When I became a mother, I tried to include my friends into my new world, but the two worlds didn't always fit. Soon enough, many of my close friends joined motherhood as well, and we connected once again.

There are still are friends though who haven't had children. Some because they don't want to, some because they desperately want to but it hasn't happened yet, and some who fall somewhere in between. I try to make sure I am still the friend I was before I had kids, but I do fall short sometimes. There is a lot less time social time available, and a lot of the social events these days are centered around families and kids. Sometimes when I call a close friend of mine who doesn't have kids, I try really hard to talk about everything in my life but my kids. It's really challenging.

Recently, one of my friends found out that she and her husband were not going to be able to have their own biological children. They had tried to get pregnant on their own. They did a few rounds of fertility treatment, and even tried to use eggs she had frozen from a few years back. All attempts were unsuccessful -- they were depleted financially and emotionally. Their doctor recommended that they consider a donor egg, so that she could still experience pregnancy and childbirth. This was not an easy decision, especially when the one thing she doesn't have on her side is time. One day on the phone she came straight out and asked me what I thought she should do: I could not give her an answer. She has to find it on her own, but I began to think what I would do in her situation.

Within a month of her telling me this, another friend shared a very similar dilemma. She and her husband also tried fertility treatments and are now beginning the process of adoption. While month after month of hoping for a possibility of pregnancy comes and goes, two of her co-workers who sit beside her have both gotten pregnant with their second children. As I was listening to her, I thought of how so many women struggle with this journey into motherhood. There is so much identity tied into who we are as women. There are many women who are happy, content and complete without having to become a mother, yet society still begs an answer from them on why they don't have children. Whatever the reasons behind having or not having children, we could all use a bit more sensitivity on these very sensitive subjects.

Having had two healthy children of my own, I don't take for granted how hard they were to come by. After months of trying, a miscarriage, and three horribly difficult pregnancies, the entire journey was quite a ride. A worthwhile ride, but not an easy one at all. My friend's rides now are equally filled with hurdles and they will get over them too. At the end of the road, if they so desire, they can both have a baby. It may not come in the package they were expecting but with a little bit more waiting, their baby will come.

In the meantime, I am committed to my friendships with them. With or without children. 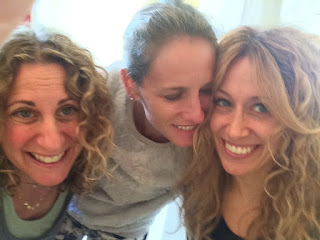