He Will Blow Us All Away


When I got pregnant with our third baby, I didn't care anymore what gender the baby was. I would visualize holding a healthy full term baby in my arms and didn't fully relax until that vision came to fruition. When we could find out what the baby's gender was we did, and it was a boy. We were all so excited, with the exception of our daughter who wanted a sister. When he arrived, I finally did exhale completely. Then I fell asleep from exhaustion. My hopes of never comparing my two children proved challenging. Regardless of gender, I only had my first experience as a basis for a guidebook. From the moment I looked at him, he was so different than her.

I didn't fall him love with him as instantly as I did with her. I had a harder birth, and out of the gate was exhausted, then he had a very hard time and needed medical care in the hospital for a few days after having him. I felt pulled from the get go. I did not want to leave this new baby's side, but I also missed the normalcy with my daughter. I wanted to get home and start our new normal. After a month or so I fell in love with him. Truthfully the adjustment to loving both of them wasn't an easy one, and not just for me. My daughter let me know then, she wasn't a happy camper. She loves her brother, and he idolizes her. She has a loyalty to him, and will be the first one who steps up to protect him when he needs her. This will be the last year of them in the same school together, and I will miss watching her walk him to his class, hand in hand.

She is a successful kid. She is friendly, outgoing, smart, and most things she sets her mind to come easily for her. As he grows older and more aware of her accomplishments, he can feel cold in her shadow. She got an award for poetry last week and was prized a trophy. He had to stay patient for an hour through the award ceremony. That was after we praised her for such a great report card that afternoon, as well as attending her piano recital. They both did a choir concert together, which was great, but this kid needed a win of his own. I felt it, my husband felt it, so certainly he felt it.

He has been taking dance now for a few months, and he is good at it. He is not the kind of kid who says goodbye easily and runs off into a new class. He took much convincing to try this class, and for the first 4 or 5 weeks he didn't want to go. He always ended up having fun, but initially, he was scared to walk in the door. When they started learning choreography for a recital, I was skeptical that he would preform. For a month leading up to the show, he would go back and forth. Some days he would come out of class saying it was so much fun, and he wants to do the show. Other times he would say "no way." He finally agreed and so we committed. Two days before he got cold feet again. I was really torn about whether or not I should push him to do this. It was out of his comfort zone, but if he was backing out because of fear, I didn't want him to let nerves win. My husband showed him videos of him in his dance class having fun. He explained that doing the show would be fun like class. We also may have told him we would get him a trophy. He has been coveting his sister's for quite sometime and really wanted to earn one himself.

Not only did he agree to do the show, but he also showed up and hour before, said goodbye to us, and rose to the occasion. From the minute he stepped foot on that stage, I was amazed. He knew every step, every move, and even smiled. He was having a great time, and I bouncing up and down in my seat watching him. Tears welled up in my eyes. I was so proud of him, and so impressed. I will never underestimate him again. He blew us all away. 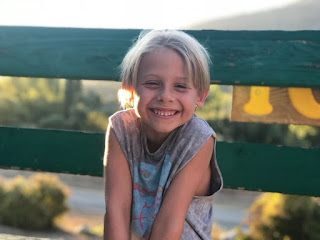