When I was an angst-y teenager, I came out to LA to visit my cousins who lived here. My Aunt was this seemingly free spirited hippy. She had long crazy blond curls, the highest cheekbones I ever saw, and a sing-songy tone to everything she said. Her 3 boys were a year older, exactly my age and one year younger than me. In my mind they were so "LA" - they all had long hair and used words like "rad." They had so much freedom and independence, and I was so attracted to the adventure they seemed to have in their day-to-day life. I took a liking to my Aunt, and learned that if she had had a girl, she would have named her Yosemite. I tried to offer myself to be the daughter she never had, but I never quite fit that roll for her.

It is fascinating to me what a few years of maturity will bring in the way of observing others. Just barely out of my teens, I was able to see that free spirit parenting really translated into absentee parenting, and that hippy style that I coveted, didn't always provide a sense of security a child needs. My cousins seemed to have freedom, because most of the time they were on their own. I never fit in as their sister, because looking back they were protecting me from getting too close.

Family is complicated though, and for all the bad we are aware of, there is always another side. There is the sometimes fleeting affection, or the once in a while "I love you" or an ability to forgive, that keep families somewhat together. Having just spent some concentrated time with my husband, my brother his children, my children and my parents, I can really understand how family dynamics can lead to explosive eruptions. My parents are not easy, in fact I would say at times they can be pretty hard going. They are aging, which in of itself is pretty uncomfortable for them. My mother is not comfortable with silence, so a long car ride can be challenging. They both have a tendency to worry, so going with the flow isn't a familiar concept for them. Add in some complaining and forgetfulness and even the most patient person can feel frustrated. My husband is the most patient person, yet I felt him losing his grip on that patience a few times on this trip.

I love my parents, and I am not sharing my experience with them in order to vent. I also have no intention of hurting them. I am writing because I think being torn between the family you grew up with and the family you made can be a painful game of tug-of-war. I also think it is relate-able to so many, yet when you are in the middle of it, you can feel lonelier than you have ever felt before. That is how I felt after a few days of being all together.

We drove back from beautiful Yosemite. It was my first time there, and it was a big family trip with my side of the family. There were no major outbursts or issues, just little annoying moments here and there, but over a concentrated few days, those little moments can build up. We actually had a wonderful trip, and Yosemite is unlike anything I had ever seen. I am sure the breathtaking views provided us with a sense of calm that was impossible to not feel. That last stretch home though, we all needed some personal space, and there was a question of what we were going to do for dinner. My husband just really wanted to finish the drive and get home. He had been a trooper and so flexible the whole trip, but he was done. When someone suggested we go to a market, he snapped back a little. This was nothing in comparison to the snappy remarks I am capable of making when I am annoyed with my parents, but because it came from him, I suddenly felt protective and defensive of both sides. I needed to be alone and I took a little space once we got home. I felt lost for a bit. I was upset with both sides, and yet understood them both too. I longed to reconnect everyone, but also knew some space and time would fix matters on their own.

Yosemite will stay with me. I long to go back again, even with this very same mix of people. We came home and watched "Free Solo" and seeing how that climber grew up, with his own dose of weird family dynamics, gave me a new-found appreciation for mine. I can understand the draw to this massive park, as there is something in it for all of us. I am glad my name is not Yosemite, and I am still proud to be a party of my crew, crazies and all. 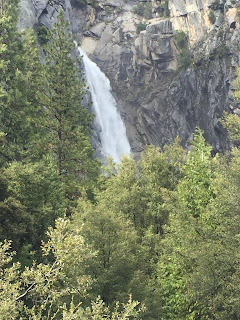