Last night, my husband and I were watching American Idol. One of the contestants was being interviewed, and she told her story, and how her life changed in one second. She started to tell the story of how she and her husband were in a car accident and he didn't survive. She spoke about the lovely night out they had, and that on their drive home, they were hit head on by someone running a red light. I grabbed my husband's arm and started to cry. The two of us have the same story as her, but without the tragic ending. We both held each other as we listened, knowing full well how close our story was to hers and how very lucky we are that we are both still here.

Having been hit head on twice now by someone who ran a red light, I feel ultra aware to how sometimes the decisions we make have everything to do with what happens to us, and how sometimes it has nothing to do with our choices at all. We could just be at the wrong place at the wrong time, and accidents happen. The first time I was in a car accident, I did not think I would survive. I felt the car spinning, and was almost certain that when it stopped I would be unconscious. I saw the items in my care flying around me, like the tornado scene in "The Wizard of Oz". I had a rush of gratitude for my life up until that point, and I surrendered into what I thought was my last little bit of time alive, and closed my eyes.  I never blanked out though, the car stopped moving, and everything seemed a lot less peaceful from that moment on. Smoke came through the car while I was strapped into my seat belt hanging upside down. With the help of strangers getting me out of the car, I eventually ended up in an ambulance. I didn't have kids then. I wasn't married. My closest family member was 3000 miles away.

The accident we had in June was similar enough to shake me to my core again, but also so very different. At no point when our car had been struck, and was spinning around a major intersection hitting other cars, did I ever surrender. My husband was awake and aware through the whole thing, and was even able to scream out to ask if I was okay. We were both terrified, but we were both together, and so very grateful our children were not with us. That night we were also coming from a lovely evening out together when a car ran a red light and into us. Just like the couple we heard about on TV, we didn't know what hit us, when it happened. We did know that had we had been going just a bit slower, the car that hit us would have T-boned us, instead of us T-boning him. The driver who hit us, was not drunk or texting, just distracted from finishing work, and made a costly mistake. We know he was badly injured, but fortunately he is still alive. Had he hit our car, ten seconds after, my husband would not have likely survived.

Our lives are full of heartache, and pain. That night took a toll on us, but after a few months we were feeling like ourselves again. It is easy to move on, and to be honest, I like not thinking about how close that call was that night. I love my life, and I don't want to get that close to losing it again. It was quite awful. I am aware though that reliving pain is a part of healing though. Research has been done that states that about eight months after trauma, the pain resurfaces again. I thought about that today, and realized that is exactly how long it has been since our accident. As we continue to heal, physically and emotionally, I will never forget the miracle of what we survived. As we spent the night at the hospital, all I wanted to do was get home and kiss my babies. When we finally did, I wept. I was so happy to be healthy enough to get home to them. 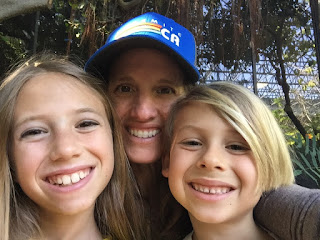