When I had my son, my second child, I wished I could have been a second time parent, first time around. I was so much more relaxed about everything second time around. With my first, everything was so precious, there seem to be a jarring difference between right and wrong, and everything was so important. The organic mattresses, BPA-free bottles,  Egyptian Cotton onesies, video monitors, the softest changing table covers, and of course the Orbit stroller I just had to have. I read way too much, listened to advice way to much, purchased way too much. My head was so full by the time I had the baby that I lost feeling of any confidence or instincts that I had left of my own.

When I brought her home from the hospital, my husband thought I was nuts. I wanted to give her a tour of her home and then read her a book. He played along, but in reality both of us in that moment were making it up as we went along. When we went to sleep that night we put her in the bassinet, co-sleeper basket between us. She slept more than both of us put together. We were both so aware she was next to us, and we were afraid we were going to disturb her, so we just didn't dare move. The next night we moved her to a bassinet beside my bed, and we all slept a bit better. That night though, I got up a few times just to confirm that she was still breathing.

We all hear or worse know stories of babies who die of SIDS, so there was really no rest for the weary new mom. Then you hear of the random stories of children who make it past infancy and something happens to them. I have now made it to 10 and 6 years as a parent and I still check to see if they are both breathing before I go to bed for the night. I don't do it every night anymore, but if it pops into my head, I run into their rooms to check. I know it is magical thinking, but I worry that if I don't do it, something could happen. Rational or not, whenever I get into their rooms, I am always glad I peeked on them. I absolutely love watching them sleep. I don't stay long, and I always give them a gentle kiss on their foreheads, and then I just look. I watch their chests rise and fall, I watch their peaceful facial expressions, and I just admire who they are in the silence of the night.

When I look at a pregnant woman who is about to have her first baby, I know she too might hear a lot of noise about the wrong or right way to parent. I know that she will probably worry that whole first year about this and that, as well. She might even buy an alarm to go in the crib, or a onesie that has a heart monitor. I don't judge. If it makes her feel better, she should buy it. If given the opportunity to speak to a new mother, I would tell her to so whatever makes her rest easy, even if it is just marveling at the sound of her baby breathing in the middle of the night. Our kids get older, but watching them breath doesn't. If it gives you some peace, then by all means. 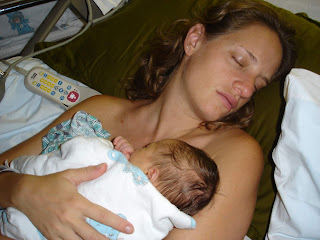