It feels to me that half of the people in this country have forgotten that we are living with a global pandemic. The messaging about schools, camps and businesses reopening has given some people the idea that we are going back to the way things used to be. Suddenly I see people have stopped wearing masks around each other, and they are not social distancing as much. I see people are having summer get togethers at people's homes. When I look at social media, I feel like a cliche, because it is actually making me feel left out when I see some people are hanging out together. I know that we were supposed to flatten the curve, and we did, but that doesn't mean the virus is gone now. In fact, the minute we started opening up again, the number of people affected by it went right up.

I am no expert on the virus and there is so much I don't understand. I do know that I am seeing this virus taking all sorts of turns that no doctors expected. We thought kids were not at risk and then children started showing up with serious complications due to overworked immune systems while trying to fight Covid19. We thought most adults without pre existing conditions would get the virus, be a sick a while and probably recover, but then people started getting blood clots and losing limbs from Covid19.  So many of us were under the impression, myself included, that mostly it's the elderly with coronavirus that end up in the hospital, when in reality 25% of the hospitalizations are under 50.  I know we all have to do what is right for ourselves and our families, but knowing what feels right right now is extremely challenging. There is so much we don't know.

The varying degrees of seriousness that people seem to be taking being quarantined, or staying six feet apart, seem to cover a huge range. It makes sense that at this point our children, and us for that matter, are starved for social interaction, but it seems that some have put that hunger before their health. Even though some camps are allowed to open up again doesn't mean the CDC has said it is safe to send your kids. I understand there are precautions in place but I can't get comfortable with the idea of sending my kid into a group of 5, 7 or 10 other kids and hope that all those kids families are being careful too. It's kind of like what they teach you in high school health class that when you sleep with someone, you are sleeping with everyone they've slept with before. I have friends who I love and respect that are sending their kids to camp this summer, it just isn't for my family yet. Not to mention I don't want my kid to have to wear a mask all day in summer heat, and yet I really don't want them not wearing a mask either.

Lot's of people are also comfortable being a betting man. I know the virus has less of a chance of living outside so they seem to throw caution to the wind outdoors. I am also not willing to sit inside my own house all summer without seeing friendly faces. I am going to the beach, I am going to ride bikes, I am even swimming in the pool that I share with my neighbors (4 at a time) but I am not ready to do much without a mask. I am also not ready to stand close to anyone. My parents were here in February when the news started to come out about the virus. They weren't supposed to go home until mid-March but by then the world had stopped in it's tracks and there was no way I was going to let them fly home. They ended up staying until last week, a total of four months. I am so grateful to have had the time with them, but due to their ages, and their risk factor, I never once got to hug them the whole time. It sucked, but it was a small price to pay for having them healthy. They desperatley wanted to get home so right before things opened up too much, they flew home. I suited them up in everything short of a hazmat suit. They had N95 masks, face shields over the masks and each carried little bottles of anti bacterial gel. It was no small decision to make for them or for us about going or staying, but in the end they needed to get home.

When I hear about needing to get to a herd immunity, I lose my ability to follow. We are at 5% now and need 40% of people to become immune in order for her immunity to go into effect, but in most cases it is really over 85% of the population needs to have immunity before herd immunity to go into effect. The only other way herd immunity can go into effect is with a vaccine, so either way we are looking at a lot of time and a lot of sickness before this is a valid option to bank on. I get the need to open up our economy again, but I don't get it at the cost of many, many lives and I feel like in some ways that is the messaging we are getting right now. I don't intent to preach here at all but rather thought I might be preaching to the choir, but the choir is singing several different songs at the moment.

So while I might see some friends "opening up their bubbles", "quaranteaming" or just letting their guard down entirely, I don't judge you, but I won't be joining you. This past weekend my daughter came off of a zoom birthday party with tears streaming down her face. She said two of her friends on the zoom were sitting right next to each other on the same bed having a sleepover. She had so many different feelings, the first being, how are they together when we aren't supposed to be? Then she said it was awful to be alone at home like the rest of the group on the Zoom, while two girls laughed at inside jokes and muted themselves to talk. Lastly, she cried because she misses being able to be with friends the way she used to, but understands why she can't. I couldn't have put my thoughts together any better than she could, nor could I disagree. There are a lot of mixed messages out there, and not a lot of answers. 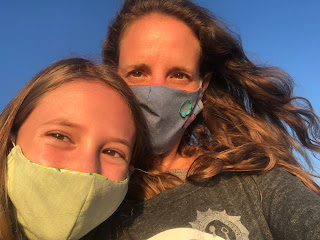