As a teenager, a letter was sent around to the NYC schools announcing an audition for a project about racism and anti-semitism. I went to the audition and found myself so invested in the exercises. The people running the audition were giving us different historic examples of hate and asking us to reenact the scenarios. Sometimes we were the perpetrators, and sometimes we were the victims. Until that day, I had never known about art or theatre for social change, but I was so moved during the audition.  I didn't even know what type of project this was going to be, but it felt important and  I knew I wanted to be part of it. I didn't get my hopes up that I would get in, but I remember being excited to get a callback.  When I got the call inviting me to participate, I was asked to commit the summer to workshopping and rehearsals. I was nervous but excited since I had no idea what to expect. Little did I know that when I stepped into that room, I would be embarking on one of the most important experiences in my life. One that would go on for over four years and stay with me my whole life.

Liz Swados was the the director and visionary of the project. She had worked with kids before when she wrote "Runaways" some years before. She swore off working with kids again, but since this was a project dealing with stereotypes, she decided to challenge herself to be open to trying again. On that first day when I met her, I was both fascinated and terrified by her. I knew right away that there were a million creative thoughts running through her mind. She had a small frame with a head of big red hair. She was intense, focused and clearly brilliant. There were over twenty of us in the group, mostly teenagers, with about seven or eight adults. With Liz guiding us like a mother, a teacher and a force, she dove us into a world of relationships. We learned about relationships, racism, bigotry, between races. With a lot of hesitation and a whole lot more trust, we bravely spoke of our own stereotypes. We were all so vulnerable and raw when we opened up with sometimes hurtful words and ignorant beliefs. Together we would break down where racism and anti-semitism started. We would act out horrific times in our history, get angry together, cry together, and then come together again.

We all went on quite a journey with what became a pretty powerful musical production. Starting with that first summer when we improvised our way through hard, hateful, hurtful skits to connecting to one another on the many traits we had in common. We parted ways for a month or so while Liz took all the work we had done and pieced it together into one seamless creation. We rehearsed our words mixed with her fine tuning and then took our production to schools around the city and then around the country. We went to all black schools, all latino schools, all Jewish schools and public schools. We felt the audience as their eyes opened wide. Sometimes our message was received with open arms and sometimes it wasn't. We were a cast of all races and ethnicities. Our message was a real one about hatred, one that hurt to hear, but was honest none the less. We ultimately sang, "We are all the same, in blood and in bone, on the street or alone." Some took that message the wrong way and after the show would speak out that we weren't all the same. We were trying to show that despite the way people have been treating one another, we are all human. Our intentions were to share that for far too long people have their vision blurred by hate, history and rumors. When the ignorance of bigotry is put to the side, it is a bit clearer to see that we are all equal in what we are made of: skin, tissue, and a heart.

My own eyes were opened to the world in a way I hadn't seen it before participating in this project. I grew up in New York City, going to public schools with diverse students and diverse teachers. The people of color in my life were my peers and I didn't quite realize how uncommon that was until I joined the play. I am Jewish though, and I had experienced anti-semitism, and after being hurt by it, I am ashamed to say I tried to hide my Judaism for quite a few years. It was more comfortable for me to blend in with a diverse group than to be segregated, but I learned that even in the city of New York, very few neighborhoods were as diverse as Flushing, Queens. There were two other Jewish girls in the play with me, one went to private prep school and was very focused on college, and the other was very religious and had never touched  a black person prior to meeting one of our cast mates. My experience was very different from theirs. I started to see that I was more in the minority and that the city that I thought was so diverse, only looks that way when you walk down the street, ride the subway or take the bus. People would branch off to neighborhoods that were mostly one race or religion.

Everyone in the cast became close. No matter what area of the city you lived in, a version of home grew in this group. We trusted each other and we were a team. We went through some trying challenges building the production and we were all invested. My friend Kizzy's family was from the West Indies and she lived in Brooklyn. I hung out with her often and her family was always so loving towards me. Once at a party at her house, the music was playing, the apartment filled with celebrating friends and family, I looked up to realize I was the only white person. It was the first time for me and in that moment it hit me how many countless times Kizzy was the only black person in a room. My identity, my awareness of the need for human rights, civil rights and equality have mostly been shaped by being part of this group. The name of the play was called "The Hating Pot," because despite the Melting Pot we thought our city was, we were mistaken.

Many years passed, and many of the cast mates lost touch. Some remain in New York but many have scattered around the country. I am connected through Facebook with a handful of them, but over twenty years have passed since we have all been together. In 2016 we were all heartbroken to learn that Liz had passed away from cancer. It all happened so quickly that very few cast mates were able to make her memorial. I don't think I have processed that I will never get to say goodbye. Recently, many of us were tagged in a video we made for her wife's birthday back then. It started a thread of dialogue between us and a Zoom call. Since that time, our country has been screaming from the injustice and loss of George Floyd. His death was one of many racist acts of violence that has made it all too apparent how much work our country needs to do. I honestly thought we had made so much change with "The Hating Pot" years ago, but our work is far from over. The first calls we had were amazing reunion calls, but since then it is clear that we are together again for a reason. The message of "The Hating Pot" clearly needs to be heard. 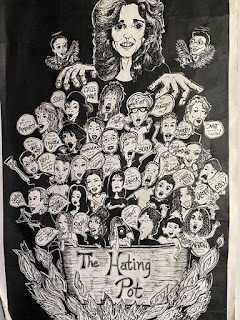