We Can Do Better

The last two weeks have been intense. It is challenging to feel hopeful about equality in this country after seeing what has happened to George Floyd, Breonna Taylor, Ahmaud Arbery -- and those are just the names we know of. My friend's cousin was shot eighteen times by NYPD last week, and no one is talking about him in the news. He was already on the ground with two others when all three were struck with bullets. They survived, but he didn't. No one is hearing his name or his story anywhere. His mother said, "It would have taken one bullet to kill him but they had to shoot him eighteen times." If it isn't caught on video and we don't know it is happening, it doesn't mean it isn't happening. Too many black lives are violently stolen and we can do better. As a country, as citizens and as human beings: we can do better.

I've read so many articles recently about how to talk to your white children about race. I've read about making sure you tell your children about what is going on in the news recently. I've read that our children will pick up on our reactions, so be aware of what our response is to what is happening. While I agree with all of these articles, I am more shocked that speaking to children about racism is not something everyone has been doing since they had a child. I was surprised to learn that a mom of one of my daughter's friends never had conversations like this before. She believed that if you let your children interact with everyone in a diverse setting then children will make friends with everyone and live happily ever after. Quite the opposite is true. I do in fact live in a very diverse school district and think that the district does a good job of teaching about inclusion and equality. It is clear though that diversity doesn't equal equity. It seems that within the five elementary schools here, the ones that serve poorer families are the same schools where the test scores are lower. That could be less parent involvement, English as a second language for some children make it harder to learn in English, less school fund raising, but it also could be that their voices aren't being heard loud enough. We can do better. For such a diverse little pocket of LA  our police officers have been known to pull over people that are black and brown. At one of our local protests this past week, they said they will "do better".

Please don't assume that children are resilient and that all of this news will not have lasting impact on them. It does and it should, but it is my job as a parent to model behavior for them. My children are watching me and taking my cue. How many friends of color do I have? How many friends of color do they have? How often so we see these friends and have them over to our house or go to theirs? How I view the police in this country is how they will view the police. I have had to explain that the very people in uniforms that are meant to serve and protect us are also the same people causing so much harm. I have had to explain that people are innocent before proven guilty in America, but that the police don't seem to remember that when they hurt people. I have explained that there are racist people in this country, and that some of the famous people in American history that they learned about were straight-up racist too. We have made signs and marched in protests, in the middle of a worldwide pandemic, because this can't wait. We can do better, we will do better and now is the time to show our children tha 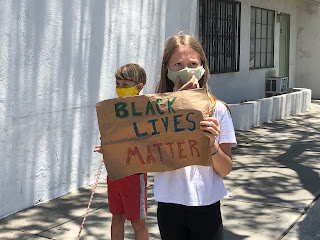 t we can see the system is broken. It was built broken and together we can do better to make it work fairly.