We are in it! Not a single person will forget what happened in the year 2020. At what seemed like lightning speed, we were all living with the threat of a deadly virus and with a mandatory lockdown. Schools, parks, businesses, beaches and pretty much every place but the grocery store were shut down in that jarring week back in mid May. What first seemed like a temporary situation, one that we could ride out with some down time, crafts and baking, turned into weeks, then months. As we all tried to adjust to our mood changes in this current situation, we watched as over and over again, the racism in this country rears its ugly head. This time, at least the world was paying attention.

In a time when all our emotions were already on edge, many of us collectively cried out at the injustices facing black lives daily in America. The murder of George Floyd pushed the world over the edge, but he is one of way too many black lives killed at the hands of ignorant whites. Many of us took to the streets in protest, which needed to happen and still needs to happen, in order for people to remember that we cannot let racism slip by like any other trending news story. The reality and gravity of the desperate need for change in this country has kicked up some dirt on some long buried nightmares. Young black people whose names and stories we never heard of are finally rising to the surface. Cases against criminals who walked free for murdering black lives are getting seen now for the first time ever. Families, who quietly buried sons, daughters, fathers, and brothers are getting to mourn for the first time with some hope for justice. The road is so long and there are so many years lost for blacks lives being pushed down that it feels impossible for them to catch up. In response to the Black Lives Matter movement, some people respond by saying "All lives matter." No one is saying they don't but if there is one person in a crowd bleeding and I give everyone bandages, those bandages are unused to the person who is bleeding. Black lives are bleeding. Literally. Thankfully, some of us are trying to stop the wounds. It is way overdue, but I am just a bit more hopeful now that people seem to be paying attention. We cannot let our eyes close to this anymore.

Covid 19 is still very much a real issue. Numbers are soaring, especially here in California. So much of the country opened up prematurely and it is showing in the rise in rates of people infected. The numbers are high, but there is some good news in the declining numbers of deaths. The death rate was predicted to be worse than it is right now. Evidence is showing that many people that are getting the virus are getting mild to no symptoms. Some people are testing positive for antibodies without even knowing they had the virus. That means that we are growing some version of herd immunity. There are of course risks and dangers to the unknown turns this tricky virus is taking. For example, blood clots, and side effects caused by an overtaxed immune system. We know that for anyone immune compromised, or elderly, this is a life or death situation, but there is hope for many that it is not as terrifying as we once thought.

On a personal level, I see such a change in the energy in my home since school is out.  For the time being I see a glimmer of hope when we get out of the house. I feel it when I exercise, when I eat a great meal, when my family finds creative ways to see people I haven't seen since the lockdown began. I feel hopeful when I read a great book, when I watch a great show, when I learn something new. I feel hopeful when I hug my husband and my children. I feel hopeful when I am having a hard time with all of this and I realize I am not alone. There is a lot of hope out there. It might take longer to get through this than we originally thought, but we will, and when I don't feel as hopeful -- and there are plenty of times I don't -- I will take those family hugs and hold on a bit longer. 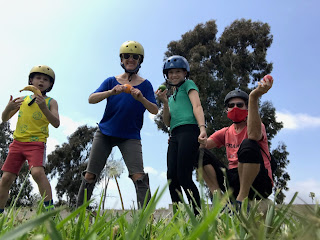