One of the hardest lessons that my husband and I keep trying to teach our children is learning to roll with it. Dealing with disappointment. Changing expectations and learning to pivot. It's not an easy lesson to learn and not one I have mastered yet myself. It is an important life skill and one that I need to get better at modeling for them. Both my kids have a ways to go in this department. There are sometimes hours lost in a day to sulking, but I am not giving up hope. When I think about how far I myself have come, I'm optimistic.

In New York, at least in my family, every time someone loses keys, or can't find an item at the store that was just there last week, or misses an important phone call, the reaction is far from zen. Let's just say, the reactions are loud, irritated and often decorated with profanities. When my husband and I started dating, I witnessed quickly how opposite his reactions to mine were. We had concert tickets to see one of his favorite bands and the tickets were meant to be delivered to my apartment. I wasn't home when the delivery was made so the tickets were left with my neigbor. It took a series of phone calls to track down where the were left and by the time we found them, we only had a half an hour before the concert started. I called my neighbor asking if I could pick them up, but the problem was he was out for the night. I was so annoyed and disappointed about missing the concert. My husband however, just suggested we go out to dinner instead. I was upset for him. I didn't even know the band, but he loved them and was looking forward to going. How could he just move on to dinner? He should have been upset, and since he wasn't I took it all on.

I realize we all react to disappointment differently, partly because of what we were taught, but also partly because of hard wiring. I have, over time, relaxed in my reactions to having to go with the flow. I don't kick and scream, but I do often feel a wave of anger and sadness lift momentarily before having to take a deep breath, to tame the beast. In the last few days, I have seen my daughter walk out of the room annoyed that I said no to some sort of dessert, or I have seen my son cross his arms and shut down to having been denied my attention at the exact moment he demanded it. Both of their feelings are valid, but how long they are willing to stay upset is what we are working on now.

Never has there been a greater lesson in learning to pivot then dealing with a pandemic. Every aspect of our lives changed practically over night. Every single one of us has had to deal with a sense of mourning of life as we knew it. Birthdays, weddings, schools, camps, performances, projects and presentations all had to be rescheduled or changed to fit a computer screen. It is yet to be seen what the long term effects of being socially distanced this long will have. We have all had to be creative to keep our connections to people. There is a time for crying about this all, and I know I have shed a few tears myself, but rolling with it, is accepting it, and I have, at least for now. Hopefully, within a year or two, a vaccine will prove to diminish the risks of this virus. In the meantime, we have a lot of time to hone our pivoting skills. 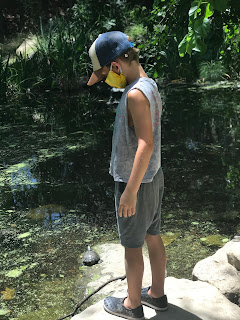