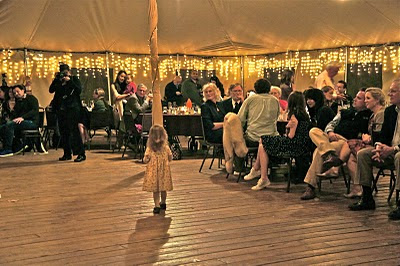 This weekend we went up to a wedding that took place on a campground just north of Santa Barbara. There were little cabins and tents -- it was referred to as "Glamping". The tents had hard wood floors, and the cabins had kitchenettes. It was pretty cool. We went up with a bunch of friends and their kids too, so it was a fun little adventure.
The wedding ceremony, the setting and the weather were beautiful. Our friend who got married was pretty creative and pulled off a really great day and night on a tight budget. It was a group effort and we all felt part of the final special day. We baked cakes, sewed fabric flowers, rehearsed musical numbers, and I made her bouquet too. I didn't think there would be much to be surprised about, considering our involvement, but I was wrong.
When we walked into the tent for the reception the musicians played. There were two violinists and an accordian player. They were playing Irish music, and Annabelle took her place in the middle of floor and began dancing. She was the first one out on the floor and an occasional cup of lemonade, or a slice of cake were the only things that tore her away. She tapped her right foot to the beat, whenever she was off to the sidelines. My friend showed her how to Charleston, she looked pretty adorable swinging her little foot from front to back.
I wouldn't describe My Little Twig as the most outgoing child. Like most toddlers, she is a bit timid and then, after some time, warms up. That timidness was completely undetectable that night. The best part of the evening was when a square dancing instructor came out to lead the guests in some group dances. Much to my surprise my daughter wanted in on every single one. She was dosey doeing with people she never met before and letting them swing her across the floor. It was really fun, and people were pretty wiped out afterwards. The night began to wind down. Guests started to leave and the music began to slow down. The dance floor was almost empty at the end of the party. Everyone was starting to hang their dancing shoes, everyone except the Pinball. The first one to start, and the last one to leave.
Posted by Shea