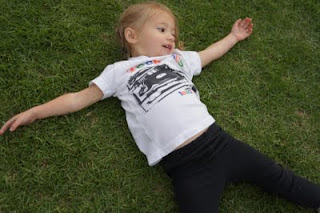 She did it! Like a trooper my little Twig went off to school with a hug and a kiss and no tears. Wow!
I went to the DMV to renew my drivers license. Her new teacher told me to make sure she knew I wasn't doing anything fun when I dropped her off. Just to stay true to my word I chose the most boring errand I could. Then I went to Target where it got a little more exciting. I tried to enjoy this new found freedom but I really did wonder if she was okay. I had the number to the school in my phone but I was going to be strong, and not call to check in. I don't want to be known as "That mom"
It probably didn't help that the things I was shopping for at Target were for an emergency kit they require you to pack for your kid. Should there be a natural disaster while she is at school she will have snacks, a flashlight, drinks, tissues and band aids. That way she should be all set EXCEPT FOR THE FACT THAT I WON'T BE WITH HER. My mind should be at peace though that she will have extra granola bars. Forty five dollars later, my time was up and I had to go pick her up. I planned on coming in a little early and when I got there Twig was coming back from the bathroom when she locked eyes with mine. She looked startled to see me and then burst out crying. She ran over saying "Mommy!"
This wasn't exactly what I expected at pick up time. I understood if she was afraid to say goodbye but I was coming to get her. The teachers explained that I had just walked in at a sensitive moment because she was washing her hands and the bathroom suddenly got too crowded with other kids. When she tried to say exude me to the others they didn't understand her and she got frustrated. Then I walked in. So I didn't have the best timing today but other than that she had a good day, and thankfully no earthquakes.
Posted by Shea