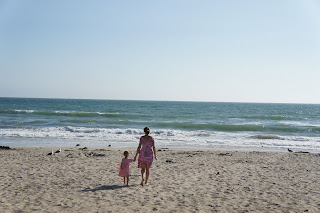 A few months ago a friend of mine wrote a story about her daughter asking about death. She explained how difficult it was to discuss the topic with her then two year old. The subject came up because the little girl had asked about her grandpa and where he was if he wasn't here. My friend carefully explained that he was in another world. I remember feeling relieved that I didn't need to field such questions and that I probably had years before my daughter asked me. Oh how I was wrong.

When we were away last month at my parents house in the country we discovered a little frog. He was hanging around the front porch and seemed willing to have us look at him up close. We stayed out there with him for a while. The next day, much to our chagrin, he was still and clearly not alive. Just like that, the topic of death arrived on our doorstep. Thinking fast my husband and I decided to be honest. We explained that these things happen sometimes, and that he is resting now.

She asked a few questions and then the subject was pretty much dropped. I read recently that the prefrontal cortex of the brain is what looks to the future. It's the slowest part to develop and so when small children learn about death they can't fully understand that it is forever. They might seem to understand but secretly they believe it will change. We have all heard the stories of children losing a parent and for months afterward they wait in hopes they will come home. I've concluded from reading this that I must be slightly immature. When my Aunt got sick and everyone else knew she was dying I held out hope that in the eleventh hour something would save her. I did it with both grandparents, and I am doing it now with a friend who is sick.

Death is so difficult for me to comprehend how can I possibly expect my three year old to get it?  I just wonder if I am setting the tone correctly. When she drops something I hear her say "it's okay" to herself. She has clearly heard me say that to her when she falls or spills something. If she loses something we do our best to replace it, but maybe we shouldn't. We didn't pull off a sit-com ending with the frog and show up the next day with a new one. She learned the real lesson that day and maybe I try to sugar coat things more than I should. I don't always know what to say, but I do know that she has done okay so far with my responses to her questions. I think I will just keep up with the honesty and hope I don't have to explain anything epic anytime soon.
Posted by Shea