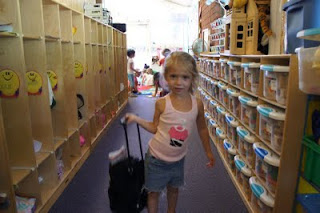 I caused my parents some real angst when I was growing up. I was a needy little kid. I had terrible nerves and took separation anxiety to a whole other level. I had the worst gag reflex and if I was nervous, it pretty much meant I was going to throw up. In preschool, some girl named Naomi held my hand, but it felt a little wet so I threw up. I remember seeing it on the ground, so I threw up again. Strong was not a word anyone used to describe my personality as a child. Or my stomach.
Back then, I worried a lot too. I didn't want to be left without my parents when I went to school. Since my brother and sister were older and got to go to school together, I felt left out, all alone at preschool. I remember being in trouble for drawing on something I shouldn't have done, and was resultingly put in the corner. I suppose it's only recently that it got a nicer name: a time out. In the corner I stared at the tiny bubbles in the paint and imagined I could see my dad's face in them. I would then have an imaginary conversation with him and ask him if he could pick me up and take me home. I realized pretty quickly that the wall wasn't magic and eventually I just began to attempt escape. I would come up with runaway plans but I would just get in more trouble.
This week my child starts preschool. The real deal. I have been so focused on her feelings, that when a friend asked me today how I feel about her going, I didn't know what to say. It has been a crazy summer and I feel like she is ready to be with someone other than me all day long. But how do I feel? I started to really think about it and got a little sick to my stomach. Will I be a little sentimental? Of course. Is my girl getting bigger and more independent? Yes. Am I afraid she will be a little like me and cry? You bet I am. She cried everyday I dropped her off at the pre-preschool summer program I enrolled her in back in July. She did great but everyday on the way begged me to stay with her. When I started telling her about starting school soon she said, "Mommy, I don't want to go. I want to be with you all the time."
When my husband wants to piss me off, he will say something like, "the apple doesn't fall far from the tree." There may be some truth in that, but I think it falls far enough. If I have learned anything from my childhood, it's that it wasn't worth all the worry. When I allowed myself to chill out, I figured out how to enjoy things. I did make my parents job very difficult and am aware of the possibility that my daughter has that potential to do that to me in the next few days, weeks, and OMG years. I'm just trying to do a kick ass job of pretending that there is nothing to be afraid of, and that she buys my front because payback isn't pretty.
Posted by Shea