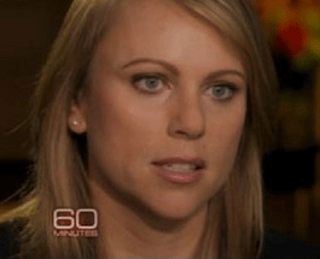 I'm sure I am not the first or last woman to write about the tragic sexual abuse that was done to Lara Logan, but I felt her story so upsetting that I feel compelled to get it out of my head. I remember hearing about her being swept up into to the celebrating mob of Egyptians just after Mubarak resigned. I thought that it was so sad that she went there to cover such a joyful time, a celebration of freedom and got enveloped into the arms of a crowd so violent. I wondered when and if she would ever be able to talk about what happened to her. Last week on 60 minutes she did.
There was nothing I could have done to prepare myself emotionally for her story. As she described what happened to her my body began to shake and my eyes began to tear. She believed that at the end of the torture she was feeling that she would be dead. She was brutally attacked by men who were supposed to be celebrating change. Instead they showed such an ugly history of misconduct to women that I fear for the future of all woman who have to coexist with men who think so little of them.At this moment, I have never felt so little of men. Not every man as an individuals, but the animalistic part of men that thinks it's ok to treat women like prey.
In the crowd of men that attacked her, someone had shouted out that she was Israeli, and a Jew. Neither is true but for these men, it was an excuse to treat her even worse. An excuse to kill her. I don't even know how to comment on the racism that it so widespread between Arabs and Jews all over the world, but it is painful to hear that it fueled their attack up even worse. After almost a half an hour of fighting for her life she was lead by the mob towards a fence where a woman whose only exposed body part-her eyes locked in on Lara Logan. She saved her by gathering women to surround and protect her away from the violence. Ultimately, she survived. Emotionally, who knows how long it will take her to recover.
Upon arriving home in the U. S. she spoke of spending four days in the hospital before returning to her family. When she finally saw her children, age one and two, she said she felt she had received a second chance at life. There is a lot of debate out there as to whether or not she made a smart decision as a mother to take this job. I understand the question, but cannot judge her decision. I have never left my daughter for even a night yet, let alone for days to another country, but I also don't have a career to uphold like hers. If woman were really treated fairly, I suppose she could take a few years off to have young children and then get her job back, but that's not reality. She also didn't think when she weighed the risk/benefit factor of covering this story that she would have been in this much danger. She had a bodyguard with her, and I'm sure she thought she would be safely protected, she could cover the story of this epic day for Cairo and get back on plane to her children. If I were under that impression, I might make the same decision she did. We take risks every day, some bigger than others, and some of us just like to play it very safe and others like to push the envelope a little. In this case sadly, there was nothing she or anyone could of done and she had to suffer at the hands of animals who weren't really part of the positive changes that the rest of us are ready for. It is disappointing to me that this kind of treatment of woman runs rampant in Egypt and that there is no justice to be brought to these men. If it meant anything at all, I would apologize to Lara Logan myself since I am so extremely sorry this happened to her. Like me, I am sure she would love to be able to thank the women that saved her, but I don't think anyone is going over there so soon to send that message.
Posted by Shea