An Eye For An Eye, 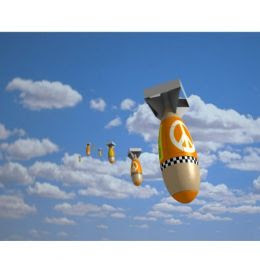 Makes the whole world blind, said Mahatma Gandhi. I can't help think of this quote as this country is celebrating Osama Bin Laden's death yesterday. The title of one news article posted today says, "Terrorism threat to US remains despite Bin Laden's killing, experts say." Really?! Who are these experts they speak of that sound brilliant. Don't get me wrong, I am happy that this evil-doer who murdered so many is finally put to a stop, but somehow the big party doesn't sit right with me.
I feel like I am watching cowboys and Indians, and we all know how politically incorrect that was. I fear we are in for some rough retaliation. Barack Obama did what those who came before him couldn't, and it is the end of a long waiting period to see justice from September 11th. What will come now though is anyone's guess.
Twig is very curious these days, so I was glad last night that when the news broke, she was already asleep. I can only imagine her hearing something on the radio and asking about it. "What's killed mean, mommy?" is not something I am prepared to answer at this point. How do you ever discuss these kinds of things with children? My nephews live in Israel, so for them it is unavoidable to hear of fighting and bombs. When one of them was five he had heard the word Gaza so many times and knew it was dangerous. My sister tried to drive on the highway and having just learned to read, my nephew read "Gaza" and began to scream as they drove near the signs. She obviously wasn't driving into Gaza but Israel is a small place so she passed it and he panicked. How can you tell him honestly though that he is always safe?
I suppose the same thing goes for natural disasters, and anyone who has ever been a victim. My friend slept under her dining room table for weeks after she experienced the Northridge earthquake. People who witness such horrors will always fear it happening again. Having a child, makes me wish I was more prepared for what to do. I'm thinking we need to fasten our seat belts in the near future. This happy calm for us right now is not unlike I feel about my clean car right now. It's beautifully sparkly clean right now but it won't take long before the seats are pretty crumby again.
Posted by Shea