Playing in the park with P-Diddy 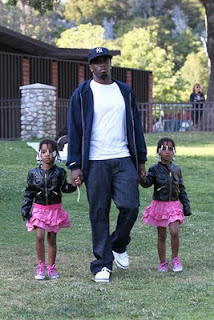 *
Last week my friend an I headed to our local playground. We take our girls there all the time and we have come to realize that the park does get its fair share of celebrities. Half the time I don't even notice them, and the other half I don't recognize them. This time my friend spotted P-Diddy, and we both agreed that seeing him, and his twin girls, was a cool run in. It was Friday afternoon and he came with a few friends and their kids as well. They definitely came prepared for a fun park day with bubbles, ribbon batons, and a picnic.
Living in the heart of celebrity-land, I know how to exist without making a fool of myself, and how to respect their privacy. Our kids don't really care about that privacy respecting stuff though. My daughter's favorite thing at this park is to run on the grass, but her little friend wanted in on P's party. He was blowing bubbles from a bubble wand and she wanted to play. My daughter and I looked in from the side lines as her friend popped bubbles with P and his kids. Twig would run in every so often to catch a bubble but mostly she waited for her friend to run on the grass with her. She was busy though, she was getting a lesson from P on how to blow the bubbles from the wand. He was very patient and sweet. When she was done we said thank you. He introduced himself to us as Sean and then gave one of the wands to his new best friend. We wanted him to sign it for her, but we thought that would be a little invasive of us to ask.
Finally the girls were running and playing when we noticed the slimey paparazzi snapping photos of our new friend. This guy was hiding and lurking about and we felt protective of Sean. Talk about invasive, they were simply having a family day in the park. We stayed on the grass a bit longer and then noticed Sean leaving with his entourage. Suddenly more cameras appeared and started clicking. My friend and I were so busy watching how well he handled the photographers and even let them have their shot, that we were confused when they stopped in their tracks. They were pointing and doubled over laughing and when I looked at their view, there was my little twig pants down squatting and peeing next to a tree. It was a true glory moment for me, I couldn't have been prouder. My offspring created a great source of entertainment for Sean and even for his grodey paparazzi. But they got a good shot of his happy family day after all.
*This was shot right before the big moment. Still looking for the one of them laughing.
Posted by Shea