One day a pair of sparkly red shoes were handed down to us from a friend. It wasn't long after my daughter started wearing them that people started to comment. Everyone mentioned "The Wizard Of Oz" and my daughter would just stare at them blankly.  She had no idea what they were talking about. I decided to show her a few "Dorothy" videos on YouTube and her obsession started there. At first she wanted to be Dorothy for Halloween, but then, since seeing most of the movie, she's added a lunchbox, a calendar, a dress up set and a doll to her collection. She is in love!

My husband and I had no idea how big an obsession this would be. I'm honestly a bit impressed since none of her friends have even heard of the movie, but that doesn't seem to sway her interest.  Her enthusiasm has remained high since she watched that first video almost six months ago. She doesn't go too many places without her Dorothy lunchbox in hand.

These days while I'm practically seven months pregnant with her baby brother, she is also interested in him.... almost as much so as the "Wizard of Oz."  She constantly rubs my belly and likes to watch him move and then feel him kick. She sticks her finger in my belly button thinking (logically) that she can get closer to him that way. She sings and talks to him, and when she's done she puts my shirt back over my belly and say she's putting him to sleep. Ask her what her baby brother's name will be and she will say "Dorothy Toto Glenda."

I actually have friends who let their kids name their younger siblings. I think Robin Williams has a daughter named Zelda, having let his son name her after a video game. We haven't made any final decisions in the name department yet but I can assure you he won't be named Dorothy. What she decides to call him though is another story. 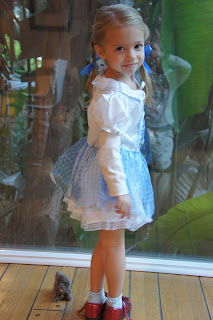