Last week my friend was walking through the airport with her three year old daughter. When they stopped near an overweight woman, my friend's daughter asked (quite audibly), "Mommy, why is that woman so fat?" Much to my friend's chagrin, she had to lean down and have a chat with her girl right then and there. Another friend told me when her daughter went with her to the grocery store, her little girl pointed to a well dressed woman and her daughter said, "Mommy, I like her. She is pretty."

Recently, my own daughter said she didn't like someone in my photo album from my wedding. When I looked at the picture she pointed to someone who was overweight and had a short haircut. When I asked her why, she said because she didn't like how she looked. I very carefully tried to explain that the way people look on the outside doesn't have anything to do with whether or not they are nice.

This is obviously the age where she begins to notice the clear differences are around her. I am sure by the time these girls are around five or so they will know to not voice these observations so loudly in public, but for now they are keeping us on our toes. Just yesterday when Twig asked about what someone she hadn't seen in a long time looked like, she asked what color skin they had. I don't find anything wrong with that question, but I am curious how her brain works. About a month ago at gymnastics, a new little girl joined the class. She is African American, a bit younger than the other girls, and has a hard time sitting still. The next day Twig said, "I didn't like that brown girl at gymnastics." My shoulders tightened and I feared that perhaps I had a little racist on my hands. When I said why to elaborate, she replied that it was because she wasn't a good listener. Phew! I responded back, trying to overcompensate for something that wasn't the issue at all by saying, "She had trouble listening, but she was very cute, wasn't she?". Just in case.

The candor that comes with this age is not quite polished yet. The flip side though is at times, the kindness goes above any adult I have seen. We were at a birthday party and there was an older woman with a walker. She clearly had very little ability to talk or move on her own. Most people, including myself, just sort of smiled and walked the other way, but Twig walked right up to her and started a conversation. At first I was a bit uncomfortable with what she was saying, but I let her say what she felt. She explained that her Papa sometimes walks with a cane for help too, then she introduced herself. This conversation went on for a few moments and I realized that we often ignore sick or aging people, and I could learn something from my little girl.

As for a fondness for the more attractive folk, I do hope that living in LA doesn't give her leanings towards the pink, pretty and popular crowd. Even if it does, she could still end up calling me one day to say she is moving to a commune on some organic farm, to teach silent meditation. I hope it is somewhere in the middle, but either way I will celebrate differences. 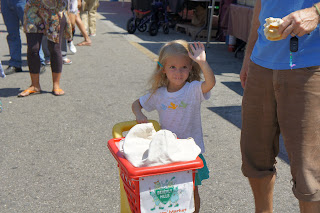