Another article came out this weekend that compared the French to the Americans and proved that the French can be superior in some ways. A few years back it was the book "Why French Women Aren't Fat" When the author was interviewed she was described as a 95 pound woman when dripping wet. Her book explained that French women eat what they want but know when to stop, they don't eat on the go, and there are more fresh foods in their diet then here in America.

This weekend an article came out called "Why French Parents Are Superier." It was written by an American who lives in France and how after struggling to "control" her kids wild behavior she looked around and saw little French children independently playing and very obediently obeying their parents. After reading it, I do feel like there is a great deal to be learned from this article. It even points out a few American tendencies that I am definitely guilty of. For example it stated that we often excuse our kids behavior because we claim that our kid is just of a certain nature. I have done that from the get go as I ran after my Twig instead of letting her figure a few things out on her own. I just feel after reading it though that perhaps the word "superior" was a little harsh. After all, isn't that the biggest ego boost to the French that the fancy well dressed Parisian folks are better than us? 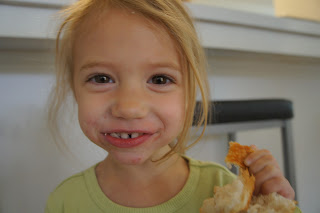 Ego aside I am working on being a bit more French in the parenting department. We already love a good baguette now and again so it wouldn't hurt to attempt some of the parenting skills mentioned. Just today, I had quite a hard time with my American offspring. She was pretty manipulative and impatient with me. This was before I read the article so I didn't try any of my new tricks, but as soon as she wakes from her nap I will show her who the "patron" is. With any luck she will say "oui oui Mama" pretty soon.
Posted by Shea