Last night I sat on the phone with a close friend. It was getting late and precious sleep time was slipping away, but it was worth the chat time. My friend has been in my life for over ten years. We have seen each other through (insert cliche here) -- all of it. She came running to me in the hardest times and made me peanut butter with apple slices. We were there for each other during the dating nightmares, heartbreaks, and droughts. We went to each other's weddings and I was there when her daughter was born.

I had Twig two years before she had her daughter, and she was the first friend to show up at the hospital to see the fresh new bundle. From that moment on and through that first year though, we started to see each other less. I began my search for women with babies the same age so I could be tired, afraid, and thrown into oblivion with people going through the same chaos. It wasn't a conscious decision to neglect a good friend. It just happened. She made efforts to come over, call, and even come help with the baby, but I just couldn't quite get it together to see her that often.

I took my job as a new mother very seriously. Any article I read, I took to heart. If I read something about a product I had been using being questionable for infants, it went in the trash. Not organic? Not for me then. I followed strict self imposed rules, and had to do it my way. Looking back I was a classic tightly wound first time mom. I wasn't eager to let other people hold, help or advise me on my baby. I could have benefited from some alone time, but I never took it. At some point my friend drew the conclusion that I didn't trust her with my baby. She wasn't all wrong. I was trying to get a system down, a system that one can never really get down, and so it was a constant work in progress.

When she finally confronted me about the change in friendship, I tried to explain how hard the year had been, and how much attention the baby needed. It wasn't until a few months after she had hers that she looked up at me with tears in her eyes and said, "I understand now, this is so hard." Last night we talked about our friends now who don't have babies, and how it has changed the friendships. How she is more aware of not wanting to isolate them, but how no matter what, having a child takes a toll on the relationships. We reflected back to our little riff, and came up with some theories. She said she understands my need to control my situation, and likened it to her cooking when she doesn't want anyone else in the kitchen. She also said that I am a lot of things, but I am not easy going. A few seconds later she asked if I was still on the phone. I was, I just got stuck for a second. Not easy going? Of course I wasn't surprised and she was absolutely right. I just didn't think any one had noticed. I suppose it was pretty obvious, but hearing it said was different. I am not even sure if it is a negative or a positive to be too easy going or too strict. Either way, she outed me. I replied that I was still there and we had a good laugh. By nearly 11 pm we wrapped our call with her telling me how happy she was we worked through that time because I am such a dear friend to her. I shared right back how much she meant to me and that I loved her too. Even if she flies by the seat of her pants, never does her laundry and lets her kid eat whatever she wants. After all, friends aren't there to judge one bit. Maybe we just point out each others flaws a little, but only very lovingly. 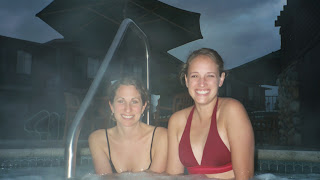