With a three year old girl, the mood can shift many times within a day. It hasn't been the easiest age for me to deal with, but at the moment we are in a sweet spot. Her sleeping issues have finally resolved (I know, I know, I shouldn't get too comfortable). Her whining has been a lot less frequent, and her separation anxiety with school has shown amazing improvement.

This morning I was so proud of her. I could see she was struggling with the decision to get sad during our goodbye and instead she walked into school like a trooper. I told her she needed to be strong for any of her friends inside that might be sad, and she took on her mission and went right inside bravely. She also has been so affectionate that I quite possibly could melt. She wraps her whole body around me tightly and then plants a strong hard kiss on my lips. Sometimes I tell her I love her so many times in a row that I fear it will lose it's meaning to her. I just can't think of anything else to say -- I just love her so much. She is speaking with such an expressive vocabulary recently as well. She said to me a few days ago while we were watching the rain fall outside, "Mommy, isn't the rain wonderful?"

Last week I threw a baby shower for a dear friend of mine, and many of the women had already had second children. They were sharing stories with my friend and they all said that when they brought home the new baby they very quickly feared they had ruined their older child's entire life. They all shared this feeling that his or her life as they knew it would be different forever. I get, intellectually, that there is very little reality in that statement, but practically speaking, there is some truth there. Twig loves the idea right now that she will be a big sister. She says almost every night how grateful she is that she is going to have a baby "brodder." It is just an idea to her now though. I am pretty hopeful though that the fact that she will be close to four by the time he arrives will help soften the blow of the changes.

The women also shared the importance of keeping the first few months of the baby being home still all about the older child. I've read that if both are crying I should always go to the older one because the little one won't remember it.  I just want to make a promise to myself now before the hectic chaos of two kids arrives to remember to spend time one on one with her. I know it won't always be easy but I never want to miss an opportunity to cuddle with her, look out the window and just stare at the rain. 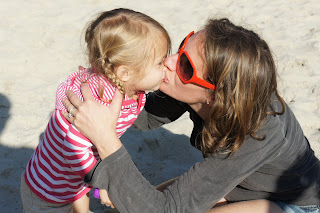