On February 7th, my father will turn 90-years-old. I would have wanted to be with him on his birthday, but he will be celebrating in Africa, where he has wanted to go for a very long time. My mother who is 11 years younger wasn't sure they should take such a big trip, but he insisted that as long they can, they should travel. After all, it's not every day that he turns 90.

My sister decided that just because my father wasn't going to be at home on his actual birthday doesn't mean he shouldn't have a party before he goes. She began to plan it and settled on a weekend when some of his closest friends would be able to come. I knew I also wanted to celebrate him so I booked a flight home and hoped to be able to keep it all surprise from him. I flew all the way to Israel for his 80th birthday and was able to keep that a secret so I was excited to do it again ten years later. Leaving the kids behind with my husband for the weekend I flew to NY and arrived Friday evening. My nephews picked me up at the airport and when we got to the house, my mom was just walking up with some takeout food. We let her walk in first, then my nephews, and then right behind them I walked up to him. It was the perfect surprise. His eyes seemed to pop out of his head, he asked what I was doing there, and when I said I came to surprise him he gave me the longest bear hug.

We all had dinner together, planned and prepped for the party, had a great time seeing old friends, and then the next day after breakfast I headed back home to LA. At the party I saw friends of my parents that I haven't seen since I was a child. It's an interesting conversation to have with someone when you are trying to catch them up on the last 25 years of your life. Equally interesting to hear what has developed for all of them. After the party we had a few guests who stayed on into the evening, and we sat down for dinner with them. A guest suggested we go around the table and say what specifically about my dad important or special to them. My sister and I shot eye rolls across the table, after putting together the whole party and talking to everyone all day, the last thing she was in the mood for is having to make a speech. We all did though and I was so glad we did. As each person took a turn around the table, I heard of how my dad had touched them with his generosity, how he was loving and open to anyone and everyone, how helpful he was, and what a kind man he is.

When it was my turn, I had a lot to say. I explained that he was the smartest person I knew. That I could ask him practically anything on any subject and he could answer me. I love that he calls me “tootsie” — even though I know he calls a lot of people “tootsie," it makes me feel special to him. I too shared how generous he is as a person, and what a fantastic grandpa he is with his six grand kids. There isn't a day when we don't speak on the phone, and I cherish every call.

My dad was born in 1928 to a religious family. He was a good son and a rule follower until he realized there was a whole world that he might be missing out on. He wanted to take a girl out on a date before she left NY and the only night she could meet was a Friday,  He left Brooklyn for Manhattan via train (which you don't do on the Sabbath) and when he came out of the subway platform and saw the streets were alive with people, he knew he wanted to be part of it. My grandmother wasn't thrilled with all of his choices. She was born in 1896 and she herself saw the seesaw of one foot in the old world and one in the new. She lived until she was 96 years old (we have some strong genes on that side of the family). Her sister also lived until 96, and they were two strong women who lived through a whole lot of change in their world. I named my daughter after both of them proudly. My father did upset the apple cart (literally since my grandfather had a cart at one time) when he married my mother. She was not the woman he escaped to meet, there were quite a few women he dated in between, but she was also not religious at all and so acceptance came but it took quite sometime.

My father has a passion for life. He can't get enough of it. When I talk to him now about his friends that he has lost, he will talk about them and then say he is sad they are gone, but that he isn't done yet. He keeps going, he has a lot to see, a lot more people to connect with and a lot more stories to tell. He jokes about getting old. He says it sucks, and it makes me smile when my dad says something sucks, because he really means it as it seems to be the most concise, emphatic way we have to say something is no good. He reminds me that an end is inevitable at some point, and he says that no one leaves the planet alive, but he has no plans of leaving anytime soon. That's good because I want to surprise him again when he turns 100! In the meantime I look forward to the daily phone calls. 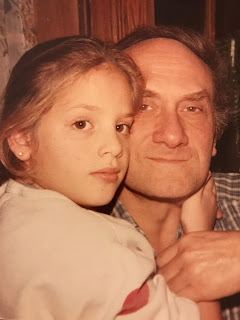