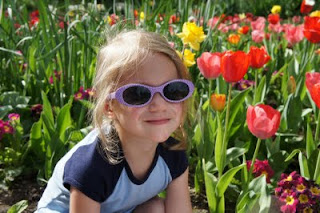 Yesterday was a beautiful afternoon, and despite traffic, I decided to drive out to meet my friend at the Descanso Gardens. I told Twig we were going to see a lot of flowers and we were both excited. We had not seen these friends in a while and my daughter was looking forward to running around with her. We were also going to meet their friends as well.
When we got there, we were greeted by the tulips. We took some photos, explored a bit and then called to find the others. My friend said they were looking for the California Gardens and to head that way. We made our way over and saw cactus, big cool bugs, and fun trails where my girl pretended to be on a hiking adventure. We found our friends, said hello and then they took out a map and tried to get oriented. I didn't realize they were so into plants, so I asked what they were looking for.
A few years back both of them lost one of their closest friends. I heard the story before and whenever my friend mentions it I find it chilling, and horrible. It was not an expected death and I think my friend feels this loss daily. Here we were with toddlers running in and out of our sight line, picking up things they shouldn't and having an obliviously fun time. I didn't know this, but the ashes of their friend were scattered in an area of the garden where she had liked to go. They were looking at it, and now so was I. The little ones skipped and jumped ahead as we turned corners, and went up and down a dip in the road until the spot was found.
Set under an billowing awning of branches was a bench. Right before my friend stepped towards it I asked her if she and her friend had been since their girls were born, and she replied that she hadn't. It was all eerily moving for me to see these two women walk up to visit this spot with two new lives climbing up beside them. The bench was made from trunks of trees and kind of reminded of the story of "The Giving Tree." In the middle was a gold plate with their friend's name. She was gone and as the way the circle of life works, here were people that didn't exist when she exited. As obviously heavy this could have been for them it wasn't. They were laughing and yelling after their mischievous girls. I didn't know this friend of theirs but if she was anything like them she was laughing with them. If she could comment on this visit I would guess she would be pissed that it took them this long to visit her, and amused at how their daughter's personalities so reflected theirs.
My daughter and I were only along for the ride yesterday, but from the outside it was a pretty cool reunion to witness.
Posted by Shea