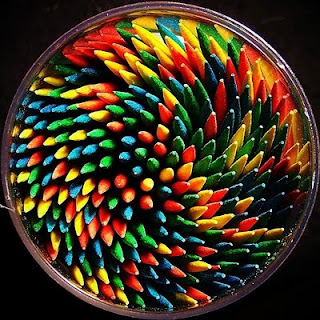 I recently began reading "Nurture Shock." It's a fascinating read. It has a chapter called, "Why white people don't talk about race." It was very interesting to read that there are quite a few misconceptions when it comes to kids and race. I thought kids were color blind, and the more diverse the environment the more likely they will accepting of diversity. According to studies done, it works the opposite way.
People also, myself included, assumed that if you don't talk about racial differences, that kids might not think there was any big deal difference and go make friends with anyone. Also, not true. Apparently, the more diversity within a large group of kids, the more opportunity kids have to self-segregate. The less you talk about race the stronger a child will build up their own ideas about differences. Many parents think kids need to be older to handle a talk on this subject matter, and the older the child the more closed the mind is.
I started Kindergarten and first grade in a private school. Everyone was white, and there were uniforms and a lot of rules. I lived in a very diverse city and was aware of the different type of people that didn't go to my school. I didn't love private school so at the beginning of second grade my parents moved me to P.S. 162, a public school in Queens. I don't remember if my mother had given me a heads up on how different this experience this would be for me, I just remember walking into the classroom and seeing that nothing was the same. My teacher (my favorite to date) was Mrs. Lee. She was black, tall and had the warmest smile. The classroom was more colorful than the private school, and not because it was diverse, but because the tables faced each other and there was art work all over the walls. I fit right in because I was a child, an individual, and not a little soldier.
I stayed in public school all the way through high school. I did have many friends of different races. Of my three close friends growing up, one was Chinese, one was Indian, and one was Jewish like me. To date though, I am closest with the Jewish friend. Perhaps we do create close relationships with people we have the most in common with. I had several black girlfriends growing up but we never saw each other that much out of school. My three closest friends lived within walking distance to me, so that factors in as well.
I would be lying if I didn't remember growing up with some bias of other people. I also remember being afraid of being Jewish at one point as well. I never felt strangely about any ethnic difference I went to school with, but one summer at the all-Jewish camp I went to, a Yemenite girl was in my bunk. I had never seen someone that dark, but she wasn't like the black people I knew. I remember telling one of my friends that the girl was very different from us. No one ever planted that idea in my head, and it obviously came from a place of fear. So, perhaps had my second grade class room had people from Yemen in it, I wouldn't have had that racist moment, but who knows? I also remember a mean, eraser chewing kid, who I knew was Catholic, make a comment about Jews. He then turned to me and said, "You aren't Jewish, are you?" I remember I quickly answered that I wasn't.
Promptly after reading this chapter I decided a child is never too young to learn that there are a lot of different kinds of people. It is also never too early to explain that those different kinds of people are a lot like us. There are so many opportunities to point that out too. I don't live in New York anymore and Los Angeles (certainly Beverly Hills) is not super diverse but there are big and small differences all around. Now, my Twig points out everything from blue eyes to brown skin. For the moment I think we are doing okay in this department. Her favorite baby doll is her little black one and she walked right through the open door of a black salon recently and no one said anything except for the owner when he pointed out that she was getting her baby's haircut.
Posted by Shea