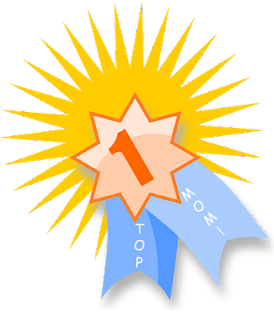 I just found out my ex-boyfriend recently won a contest on Circle Of Moms for the best parenting blog. There are all sort of reactions going on in my head right now. First, how old am I really, now that everyone is, or is becoming a parent around me? I know the answer, no need to comment on that. Second, although he is older than me and has been a parent for a lot longer, I suddenly feel competitive. Third, he has written like five children's books since we were together. He is a single father of three boys. I feel so behind.
In truth, I am very impressed and proud of him. He deserves all of the acclaim. He works hard and is doing what he loves. He has gone through a lot to get to this point. After losing his wife in a tragic accident just shortly after they had twin boys, he was left to raise all three boys on his own. While trying to juggle his own loss, and caring for his children, he was given time off as an attorney and he made the decision to be more involved with his kids and not return to work as an a lawyer.
With the recent loss of my brother-in-law, I have thought of my sister raising her two boys alone now. She and this ex were friends as well, and she is a lawyer and her company has been very good to her in giving her time off as well. I don't think leaving the job is an option for her, but I hope his passion inspires her to do things she loves as well.
His blog is dadinreallife.wordpress.com. I haven't talked to him much in the last few years but I can see from here, things are going well. If I decide to enter a mom blog contest, I will ask him for advice.
Posted by Shea