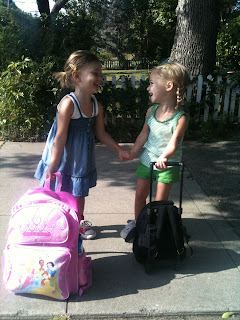 Yesterday was a big day for all of us yesterday. I had my procedure, and Pinball had her first day of school (or camp I guess). My procedure is done and as hard as this whole miscarrige thing is to go through, my focus is shifting back to my daughter now. This is her last week of being two and she is very excited to be doing three year old stuff. I packed her a lunch, an extra set of clothes, sunscreen, and we marched out the door. On our way her little friend and her mother were in the car behind us and we set off on her first independant adventure.
We chatted on the way about what she was excited about and what she was nervous about. She said she was excited to be with her little friend, but nervous about me dropping her off. My husband and I were worried abut the goodbye for a few reasons. One is I had to get to my appointment and didn't need the extra anxiety of her needing me; secondly, my husband and I both experienced such terrible seperation anxiety surrounding the first days of school or camp, that we hoped it didn't pass on to her. She kept telling me to stay a long time, and not to leave.
When we all got there she was holding hands with her friend and both of them lugged bags almost as big as them. They giggled and were ready. When the doors opened we were the first there and the girls had such a good time exploring all the new toys. Then it came time for the big goodbye and as expected her little friend did so easily and Pinball asked me to stay, wrapped both arms around me and her bottom lip began to shake followed by a big cry. The lovely Mary Poppins-like teacher swept her up in her arm. I then kissed her and said I will be back soon. My friend and I walked out and stood outside to listen. Less then a minute later she was fine.
My husband went to get her and she was covered in paint and exhausted. She did it though, she made it through and had fun too. We are all so proud, especially her.
Posted by Shea