Ding Dong The Witch Is Dead 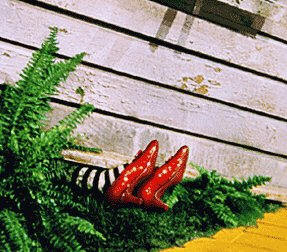 "The Wizard Of Oz" has become a big hit recently at our house. Twig hasn't even watched the movie yet, just many many clips on YouTube. She even decided to be Dorothy for Halloween, which was a welcome change from what she wanted to be before (a cash register or a yellow dump truck). I am all about being "outside the box", but how would I even cut a box to make it look like a cash register? So when she decided on Dorothy, I ran with it.
As she gets more into the videos though, we had some explaining to do. My husband and I stumbled on "Ding Dong The Witch is Dead," and played it for her while we cringed. She didn't ask, so we didn't say anything. The lyrics go on about how Dorothy killed the witch, and the song is such a big celebration of death. It all felt wrong. Now as a kid I watched this (a bit older than my daughter is now) but I remember being a little spooked by the image of the dead witchs' legs under the house. As I mentioned in an earlier post, death is not a subject I am avoiding with her, but celebrating the death of a "bad person" is something I haven't even figured out yet.
This past week when bloody pictures of Kadafi were everywhere, I was disturbed. Yes, this man needed to be stopped, and his death represents the possibility of freedom for people he controlled for years, but seeing him dragged along with cheers sits strangely with me. As I write this I have to remind myself that "The Wizard Of Oz" is only a movie and she hasn't asked about Kadafi. I hope I have a few more years to think about how to respond to those kinds of questions.
Posted by Shea