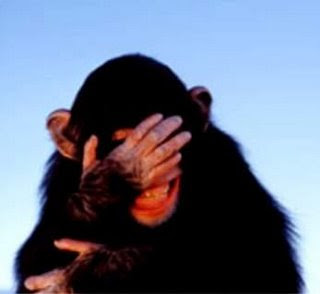 I have found myself in more than a few awkward situations lately. I am not sure what the proper etiquette for handling these run-ins would be, but I am almost certain nobody else does either.
When I share bad news with someone and they try to acknowledge it and then quickly change the subject, it just gets strange for all parties. My husband and I are currently having an addition put on our house, and our contractor just asked for a lot more money than he quoted us to finish the job. We sent him an email stating that we cannot pay is extra fee but can offer a little less. He hasn't responded but when I ran into him on the street today he brought up a new kind of paint as if our email exchange occurred in an alternate universe. That was kind of uncomfortable. Even when I walk someone back to their car and see they got a ticket, it feels like I am witnessing a private moment that should have been just shared between the car and the owner.
I tend to be over-sensitive when thinking about feelings, whether they are mine or someone else's. There is a need to make sure no one feels strange when experiencing strange situations. I sometimes think there are two different groups of people, the people who will tell you when you have food in your teeth and the people who don't tell you because they don't want to make you uncomfortable. Either way it sort of sucks to be the person with food in your teeth. I always appreciate people who tell though and secretly admire them when they tell you in such a carefree manner.
Having been there recipient of bad news a bit lately, I can see how tricky it is to be on either side. A doctor having to give bad news, or the patient who receives it, an employee, or the boss letting them go, the child who gets pushed by a another child, or the parents who witness it all and have to step in. These things are never fun, and when they have happened to me I have felt like I wanted to crawl into a hole. The last few times I have heard bad news, I got so lost in my emotional response that I didn't ask the right questions. I was so eager to end the discomfort and end the call, that I ended up prolonging the issue when I had to call back to get more information. I can hear when the other person is trying to get off the phone too. It's horrible.
This week, I tried to help out someone who was looking for work. I knew her from years ago and knew she was a hard worker and deserved better treatment than she was getting from her old boss. I was trying to do a favor and help her out, but it has turned into a bit of a mess. She is calling me almost everyday and I feel like I have opened an agency for one person. She wants to know how to get places, what she should say, how she should tell her old boss she is leaving, etc. I ignore her calls because they go on and on. I also found out she has a medical condition that might keep her from being a good candidate for the jobs I referred her for.
Getting to the point where you don't say to someone things you need to is unsettling. As I get older I don't feel these situations get any easier. My friend has had a babysitter mispronouncing her daughters name for months now. At first she wasn't sure and by the time she figured it out it was too late for it to be anything short of a delicate, confusing mess. Now I am stuck in the middle with this woman. I wish I didn't get involved but now that I have I suddenly wish I was the type of person who can tell people when they have food in their teeth.
Posted by Shea