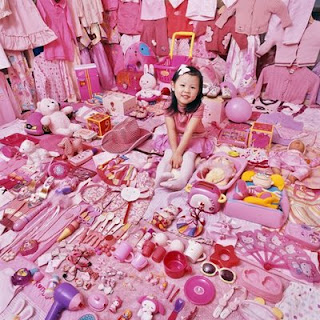 Once every couple of months a beautiful thing happens in my house: it gets cleaned by a housekeeper. This is a luxury that I don't take for granted. Some of my friends don't have them at all, while others have them once or even twice a week. As a child, my family never had someone clean for us, and we didn't know anyone who did. When I think of what I saw around me compared to what my daughter will see around her -- well, it makes me take pause.
I love Los Angeles. The weather is incredible, compared to NY. You get a lot more for your money, there is so much more space, and for a kid there are countless activities. It's a great city. With any place though, it has its cons, and the big one here for me is the intense focus on image. As I wrote in earlier blogs, when I first became a mother I fell into the wrong group of women. Not unlike when I first moved to LA and chose a couple of bad friends, just because I had a few things in common with them. When I became a mom, I chose these women simply because they were new moms too. I still get down on myself at times for being such a poor judge of character at the old age of thirty something (blame sleep deprivation).
The women I befriended quickly became a group, a clique, a club, and although I was in it, I knew I didn't belong. I have a lot of fantastic friends, and I don't have everything in common with all or any of them, but at their core I know they are good people with the intent of being a good friend. I can't say the same for some of these women. I can honestly say their intent was to look better, be richer, and seem more together than the rest. It was junior high all over again. Having a daughter made me realize all the quicker how the example these women were setting was so off and away from the ones I wanted to set. They weren't all bad, but overall it was a bit too pretty in pink for me.
I learned a lesson from that time, and know now that I don't judge anyone who has more money that me, or has a nanny, or their kid goes to the "best" preschool. But I do raise an eyebrow if they aren't passing anything on to their kid besides a sense of entitlement. I know it's not easy to avoid here, compared to other places, but I want my daughter to have an awareness that things don't simply fall into her lap. In this economy, it's seems like LA still has a lot of pressure to keep up the facade. I was pleased to see my daughter cleaning the shower with a rag the other day and say that she was helping to clean. I'm glad she sees that it needs to be done, and that her parents have house jobs just like she does (she puts her dirty clothes in the hamper -- I am not working her to the bone at the age of three, so don't call Child Protective Services on me...yet).
Posted by Shea