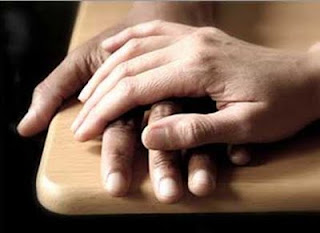 Several times this week my daughter has driven me to an excruciating state of frustration. I feel my shoulders tense up when I have to say no to something. I flinch in anticipation of the tantrum that often follows her disappointment. The hair on the back of my neck stands with the sound of her whining. I feel I have a low tolerance for the frequency of her breakdowns, and feel pushed beyond my ability to respond rationally to her. I start out as patient as I know how to be, but when she begins to kick and scream, I temporarily envision myself jumping ship.

I hear myself throw out threats, disclaimers, and conditions in an effort to curtail her downward spiral. I saw myself get physically close to her face and felt my lips furl and my finger point. I can hear myself say things I never wanted to say to my child. It sucks even more when a couple of days later I hear her say things like, "You may not talk to me like that, mommy" -- right back at me. This is the reality of three though -- it's not all adorable. A lot of it is pretty freaking amazing, but this part is not easy.

A few days ago I was trying to get work done and she was supposed to be napping, but instead she was calling out to me from her bed about every two minutes. I finally went up and the reality hit me that I wouldn't be able to leave her room until she was allowed to leave with me, and I got so mad at her. I wasn't at all sensitive to the fact that there was no way she could have fallen asleep since there was construction going on right outside her door. I was just pissed I didn't get enough time without her, and I misplaced all my anger and told her I was upset and needed a break from her for a little bit. She was beside herself, and I could tell I hurt her feelings. I took a second, pulled it together and then pulled her in close. Again, this is all new to both of us and we have to be careful not to push each other too far. We are both learning on the job.

Today she hit the ceiling again. This time, she was hysterical because we forgot to take Baa (her favorite stuffed sheep) to her check up to introduce him to her Doctor. I could see she was really disappointed. She asked me to please turn the car around and go back home to get him. I explained that we couldn't miss our appointment and that we could tell the doctor all about Baa, but she wasn't having any of it. Twenty minutes of screaming and wailing (all while she was strapped into a car seat) was hard for her to feel, and hard for me to listen to. Even with all the compassion in the world, I still had a hard time feeling sensitive around the fiftieth attempt to reason with her.

Feelings can be so strange. Today, watching the news, I saw Mubarak in a cage in an Egyptian courtroom. He was an evil man who caused so many deaths and so much suffering. Lying there today I felt compassion for him. I am confused and conflicted when an elderly man turns out to have been a Nazi and finally gets jailed in his eighties. I know he is not worthy of his freedom, but he looks so vulnerable now. It's all part of humanity, although I am sure these men I speak of would never have been sensitive to who I am, as a Jewish female, but still I can feel sad for them. At the same time that I have feelings of empathy for sick, twisted, horrible criminals, I look at my daughter like she is nuts, and it scares me a little. Even as I write this, I can't believe I have put my daughter in the same sentence with any one so horrible. But that is my point, I am human, and she is human and sometimes we just feel what we feel.
Posted by Shea